To give a TED Talk is one of the biggest honor and visible professional highlights in any careers. Anna M. Sevcsik, the Founder of the Association of Perinatal Genetics was asked to become a keynote speaker at the stage of TEDx Liberty Bridge Women. Anna has a fascinating life story. She built a successful NGO […]

To give a TED Talk is one of the biggest honor and visible professional highlights in any careers. Anna M. Sevcsik, the Founder of the Association of Perinatal Genetics was asked to become a keynote speaker at the stage of TEDx Liberty Bridge Women. Anna has a fascinating life story. She built a successful NGO that helps ten thousands of women who experience controversial medical reports during pregnancy or deal with the emotional and physical consequences of miscarriages. Anna needed a communication expert who helped frame her story that she could present on the prestigious TEDx conference.

BURIBA branding and advertising agency has been working for the Association of Perinatal Genetics for many years. We have developed two gamified awareness campaigns for them – one of them won multiple awards. We are also responsible for their social media management on Facebook and Instagram. Barbara Burian, the CEO of BURIBA, branding and advertising agency was the creative director of each of the gamified PR campaigns. Barbara knows Anna and her association very well. TEDx automatically assigned an amazing coach to Anna but she also insisted in involving BURIBA in the preparation process as we are the only ones who know how to frame her story in a way that will beneficial for her own PR and also for her NGO’s meanwhile the audience feels attached to her message too.

We had 10 sessions with Anna. First we created a deep interview with her when she spoke about her life path starting from her childhood. Then we asked some crucial targeted questions where she and we could understand what key message she would like to get across on the stage. Then the exciting part started. We wanted to spice up her story by calling out different emotions during her performance. Our team believes a TED talk is good only if the audience connects, listens and interacts.

We created an emotional rollercoaster around the strategical milestones in her storyline. During her speech we asked Anna to switch tonality multiple times. Anna had to show all the characters that she represents in her life: the serious business woman, the non-judgemental and emphatic social activist, the mother of 5 and the mother of 8, the wife, and the superhero who saves the lives of new-borns and families.

After we figured out how and when to bring out the right emotions we wanted to grow from very good to excellent. We hid some surprising, physical actions in her performance that made the crowd watch her with their full attention until the last seconds of her TED Talk. 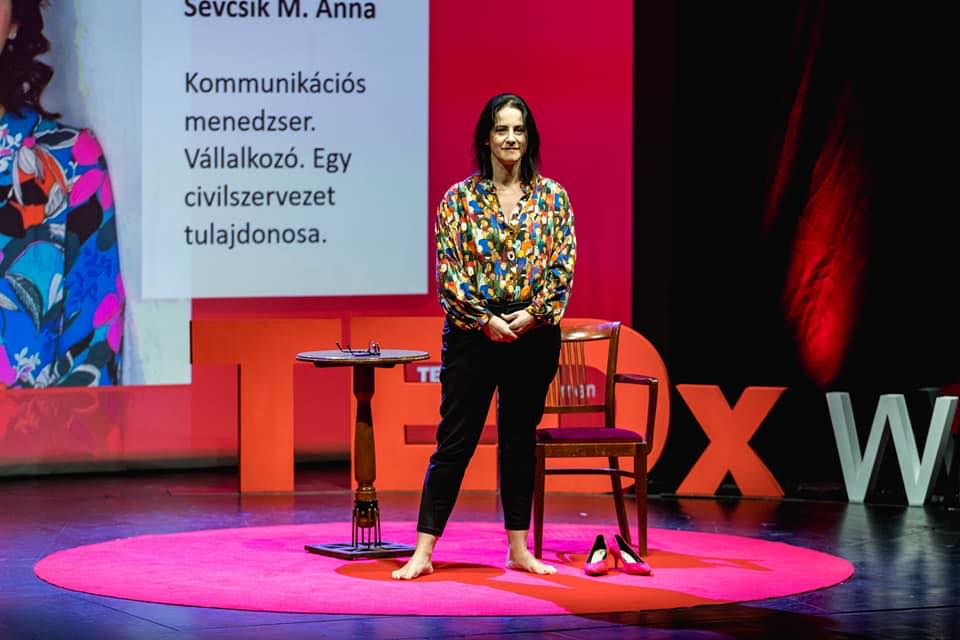 A 10-slide presentation designed by us was projected during her talk. We paid attention not to redirect the audience’s attention from her to the screen therefore we communicated only with pictures and short keywords to support her performance.

The outcome was brilliant. The audience followed her emotional state as theirs. The crowd was surprised, angry, relieved, happy and entertained. They were listening quietly, then they were laughing loudly, and finally they were deeply touched when the happy ending hit on. Anna got only positive feedback and several magazines contacted her to publish her story and promote her NGO. She was overwhelmed with the positive feedback of the press and the new community members of her NGO.

If you are planning to present in front of a big audience or you need some tips for your YouTube videos, contact BURIBA today. We are here to help.